in the life path

Prof. Carlos Lemos Jr. was born in Rio de Janeiro, Brazil, being the son of Carlos Lemos (Senior) and Tulla Lemos. He was introduced to martial arts at the age of 3 through Tae Kwon Do and moved to Judo when he was 10 years old, where he achieved great results. Lemos was also an avid surfer who may have turned pro if not for Jiu Jitsu.

Prof. Lemos’s first coaches were none other than three legends of the sport: Professors Roberto “Gordo”, Alexandre “Soca” Carneiro and Renzo Gracie. He was graded as a blue belt by Prof. Gordo and became an assistant coach at his gym, one of the GB schools in Rio. Once Prof. Gordo moved to Sao Paulo, Carlos started to train under Master Carlos Gracie Junior, who advanced him in the main Gracie Barra school in Brazil from blue belt to black belt.

In October of 2001, Lemos established an exceptional BJJ fighting career in Brazil and international. In 2002, after a becoming a Black belt World Champion, Lemos, now a Professor, shot his first series of DVDs for the “LEGENDS OF GRACIE BARRA”.

When Escorrega was 14 years old he began training Brazilian Jiu Jitsu, the reason being, his former girlfriend had started dating a boy who practiced Jiu Jitsu. Carlos wanted to beat the new boyfriend and joined a BJJ class but soon understood that martial arts were not about negativity, and all that anger turned into admiration and love for grappling. When questioned by BJJ Heroes about what brought Carlos Lemos to the sport, he replied:

“I told myself I will become better than this guy in Jiu Jitsu and I will defeat him… within a couple of months I realized that Jiu Jitsu wasn’t about beating someone or revenge, it was about mutual welfare (helping people around you), brotherhood, duty, honour and friendship. Indeed I made the best friends of my life through it, people that I would take a bullet for, and I know they wouldn’t hesitate in taking one for me. Bang on… I found the family that I had always been looking for, I was hooked and I could never stop it, it became my way of life.” 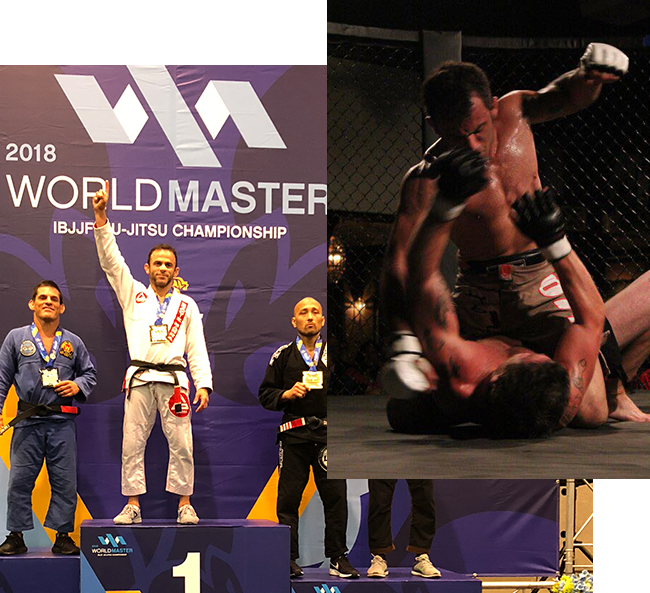 Carlos Lemos’s first coaches were none other then 3 legends of the sport, Roberto “Gordo”, Alexandre “Soca” and Renzo Gracie. He was graded as a blue belt by Gordo and became an assistant coach at the gym. He started taking classes with Carlos Gracie Junior from blue belt and earned all his belts from their on from the Gracie Barra leader.

After his adventure in Europe, Carlos moved to the United States, namely Chicago, where he established himself and resumed his competitive career after almost a 5 year break. It was also in the United States that Carlos made his MMA debut in 2011.